Bragi (www.bragi.com), once a Kickstarter darling and the company behind The World’s First Hearable, is proud to announce the next generation of true wireless devices. The two new members of the Bragi family include The Dash Pro tailored by Starkey, The World’s First Custom-Made Wireless Ear Computer, featuring a unique, personalized experience, and The Dash Pro, a polished, reloaded, reengineered sequel to The Dash that continues to press innovation forward.

The Dash Pro tailored by Starkey and The Dash Pro aren’t just headphones, hearables or true wireless devices, but powerful ear computers. Bragi’s mission brings together artificial intelligence, mixed reality, service enablement and cognitive learning in a single product designed to improve the quality of life for its end user. Partnerships with some of the world’s most prestigious companies including IBM, BMW and iTranslate offer differentiation between the Munich-based startup and its competition.

The Dash Pro tailored by Starkey and The Dash Pro join The Headphone, widely released in January 2017 andThe Dash as Bragi’s third and fourth products.

“The Dash Pro tailored by Starkey and The Dash Pro are the most intelligent devices of their kind, representing incredible advancement and achievement over the last 18 months,” said Bragi Founder & CEO Nikolaj Hviid. “These magical devices have seamless Bluetooth pairing and connectivity, a longer-lasting battery life and groundbreaking achievements like real-time language translation powered by iTranslate, a 4D menu allowing users to go hands-free and integration with IBM Watson’s famed AI. We’re excited to enable people to do more.”

The Dash Pro tailored by Starkey, The Dash Pro and BOS 3 were unveiled during a launch event at Blueprint+Co in New York City on May 16.

The Dash Pro tailored by Starkey is offered exclusively through a highly-assisted personalized shopping experience at approximately 5,000 audiologists throughout the United States and Canada.

“We are thrilled to announce the launch of the Dash Pro tailored by Starkey Hearing Technologies. As The World’s First Custom-Made Wireless Ear Computer, this product is going to empower consumers to lead with confidence in everything they do,” said Brandon Sawalich, Senior Vice President, Starkey Hearing Technologies. “Our partnership brings a whole new dimension of personalization and customization to hearable technology to the market.”

Bragi’s advanced integration of sensorics will provide value to Starkey’s consumers, while Starkey’s knowledge of advanced audio processing and psychoacoustics expands Bragi’s potential to enable people to utilize Fourth Platform (contextual computing) interfaces. The Dash Pro tailored by Starkey will take this one step further, enabling athletes, musicians, content creators, technophiles and other precision-based fields to see real benefits from having the ultimate fit and a truly personalized, customized audio device made just for them.

Each The Dash Pro tailored by Starkey device is crafted based on an exact impression of the user’s ear canal for best isolation and a perfect fit with an emphasis on clarity, detail and no loss of bass frequencies. HearClear replaceable WaxGuards allow for long-term wear, minimal cleaning and at 499 USD (699 CAD), The Dash Pro tailored by Starkey is one of the lowest priced custom-made in-ear headphones (wired or not) currently available on the market.

The Dash Pro tailored by Starkey also includes a craftsman’s signature on the packaging, as well as a laser engraving of the user on the external slider and earbuds.

The Dash Pro
The Dash Pro offers best-in-class, professional grade Bluetooth connection quality and amazing audio without interruption. A simple one-touch setup connects Android, Apple or Windows devices in a matter of seconds. The Dash Pro carries up to five hours of battery life on a single charge and five charges (up to 30 hours on the go), also best in the true wireless category.

The critically acclaimed audio transparency feature carries over from The Dash, allowing desired sound to pass through The Dash Pro, or cancelling out what you don’t want to hear. Knowles® Balanced Armature Speakers deliver premium sound in an ultra-small package to enhance comfort and listening pleasure. Knowles Versant™ advanced voice technology helps deliver clearest possible hands free communication and voice commands in the most adverse situations, reducing the need to look at a second device.

There is an advanced audio codec with reduced white noise and new foam tips for stronger bass and a better seal. Bragi FitSleeves are also included with The Dash Pro.

The Dash Pro contains more than 150 micro-components, a 32-bit processor, artificial intelligence powered by Dash AI and 27 sensors, all in a package about the size of your fingertip. Those sensors help ignite Bragi’s unique Kinetic User Interface, which enables users to literally turn their body into the device with a tap of the cheek or a nod of the head through the Virtual 4-D menu.

The Dash Pro’s design has undergone careful exterior alterations from The Dash. The aluminum slider is now gun metal with a Bragi blue or Starkey gold leather inlay. The Dash Pro is exclusively available in black.

The Dash Pro retails for 329 USD (349 including VAT in the EU) and is available right now through the Bragi Shop (http://www.bragi.com/shop). Rollout to major retailers including Best Buy are taking place over the coming weeks. 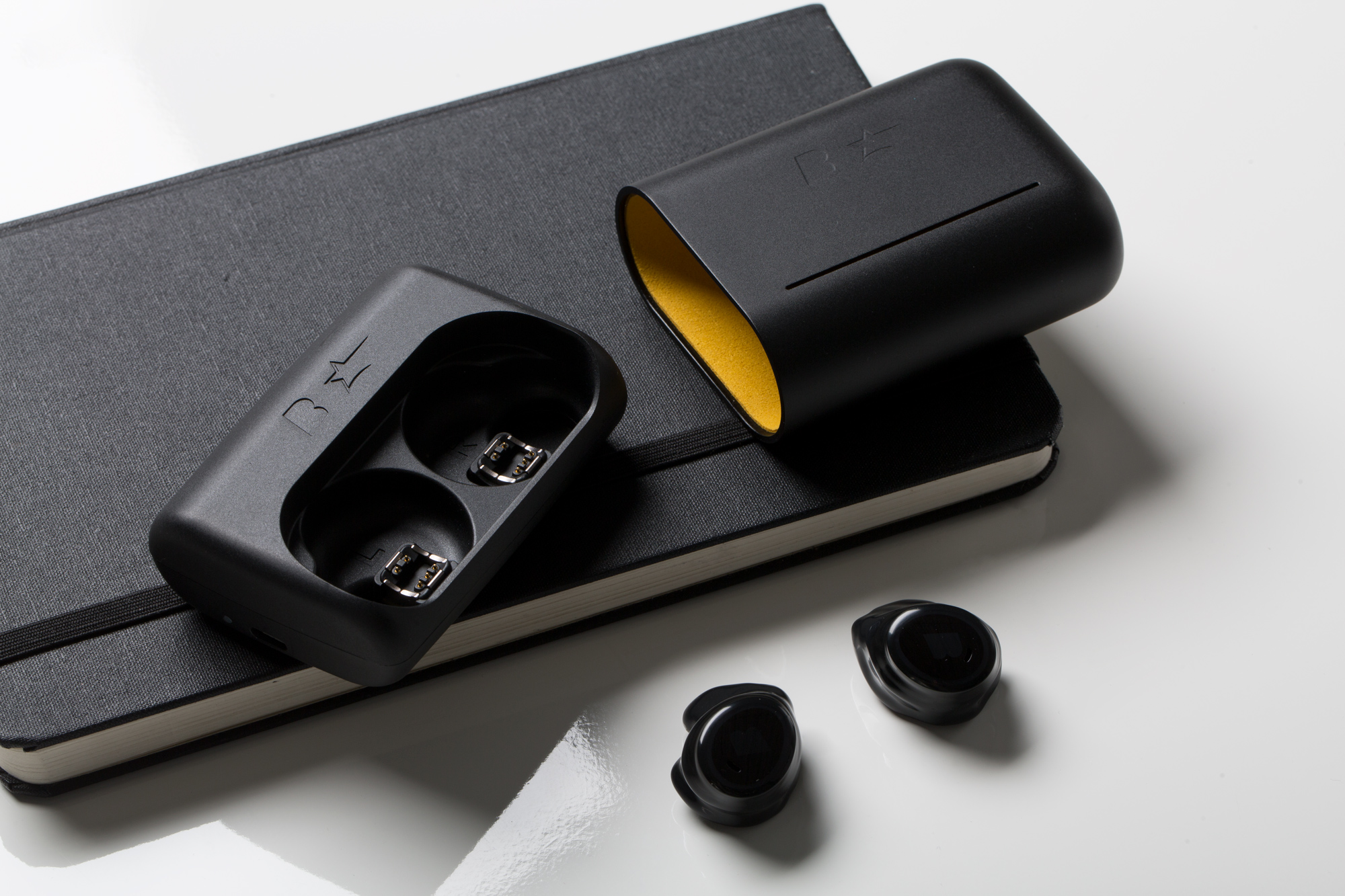 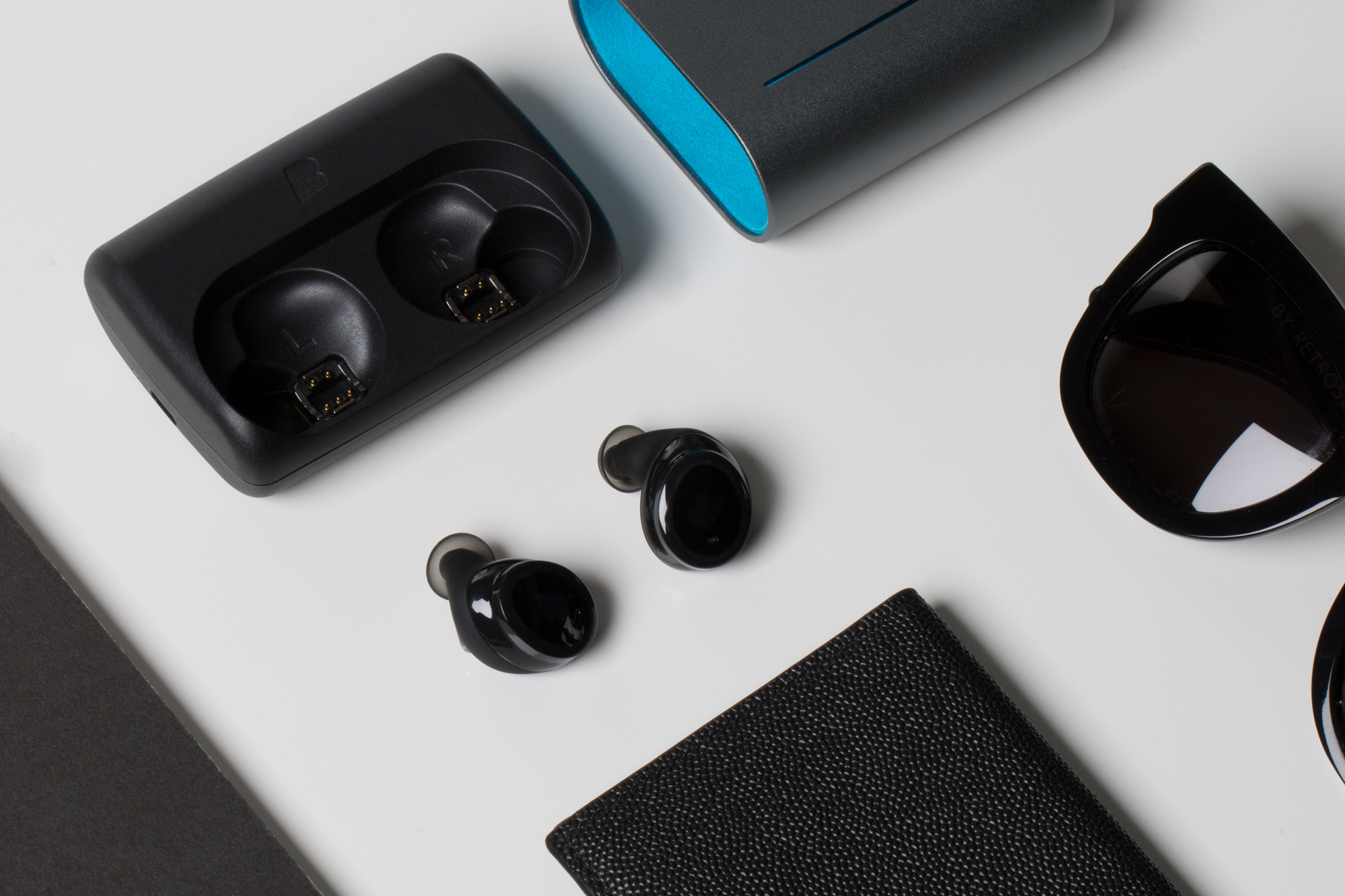 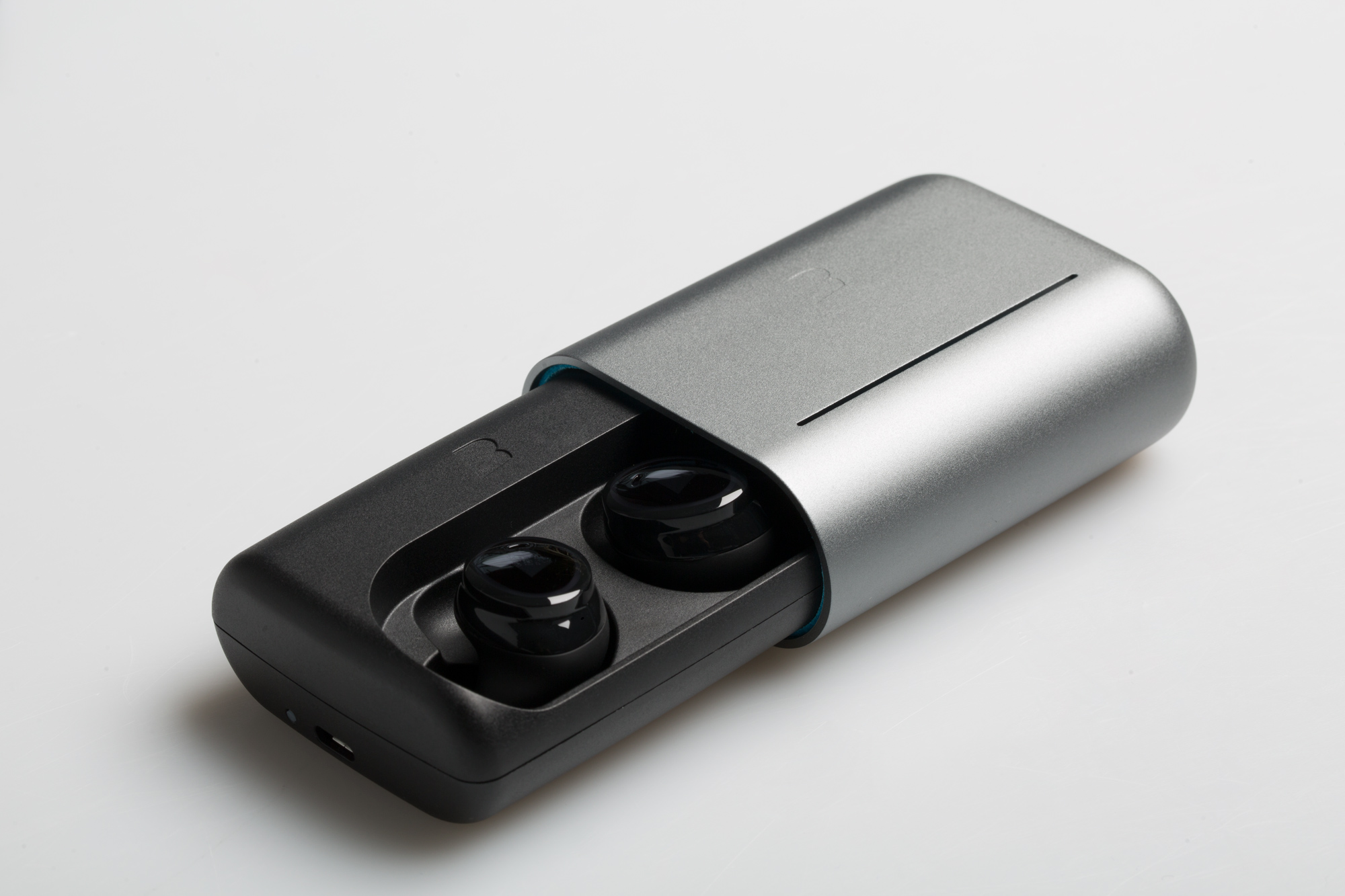 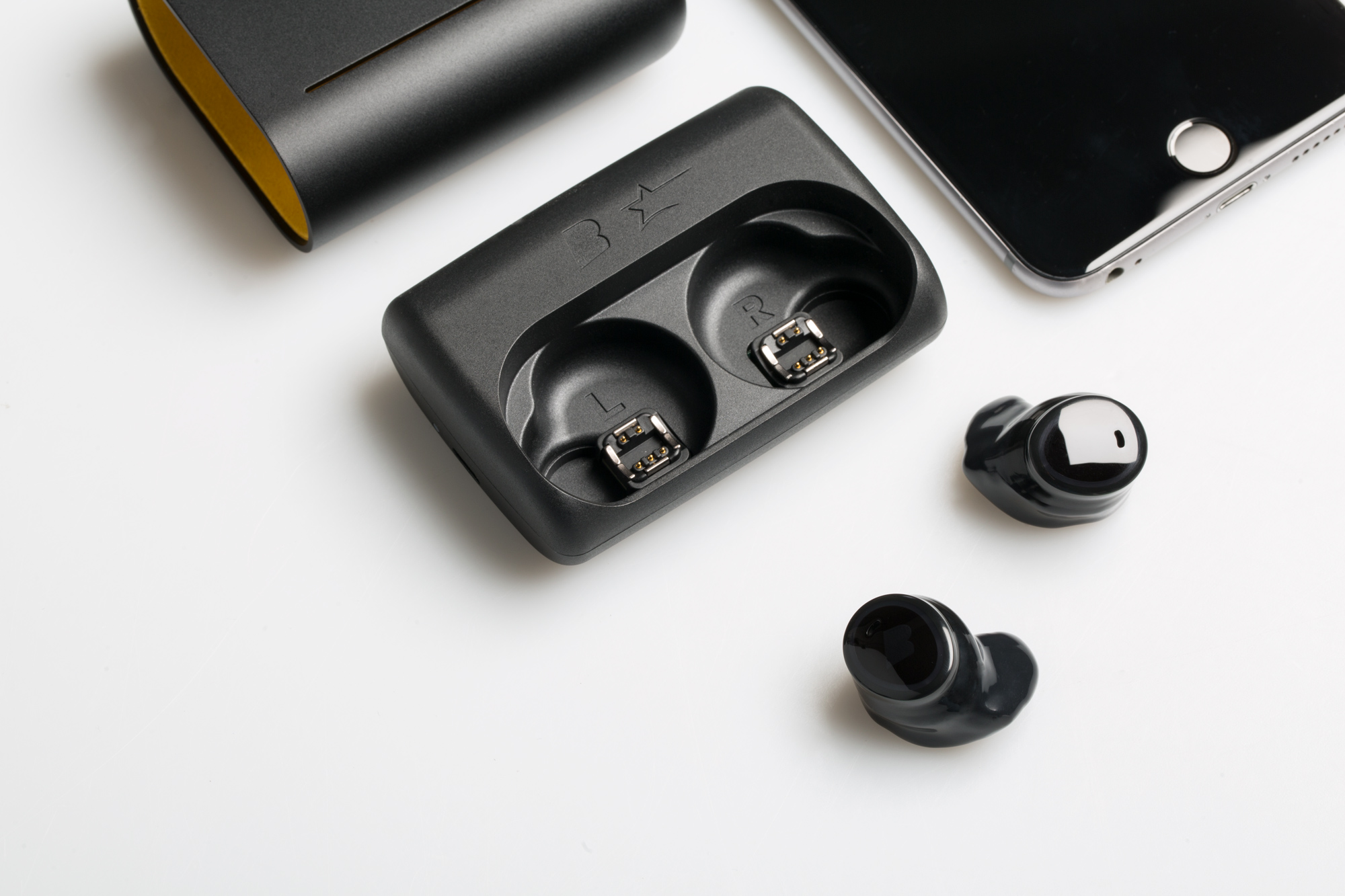 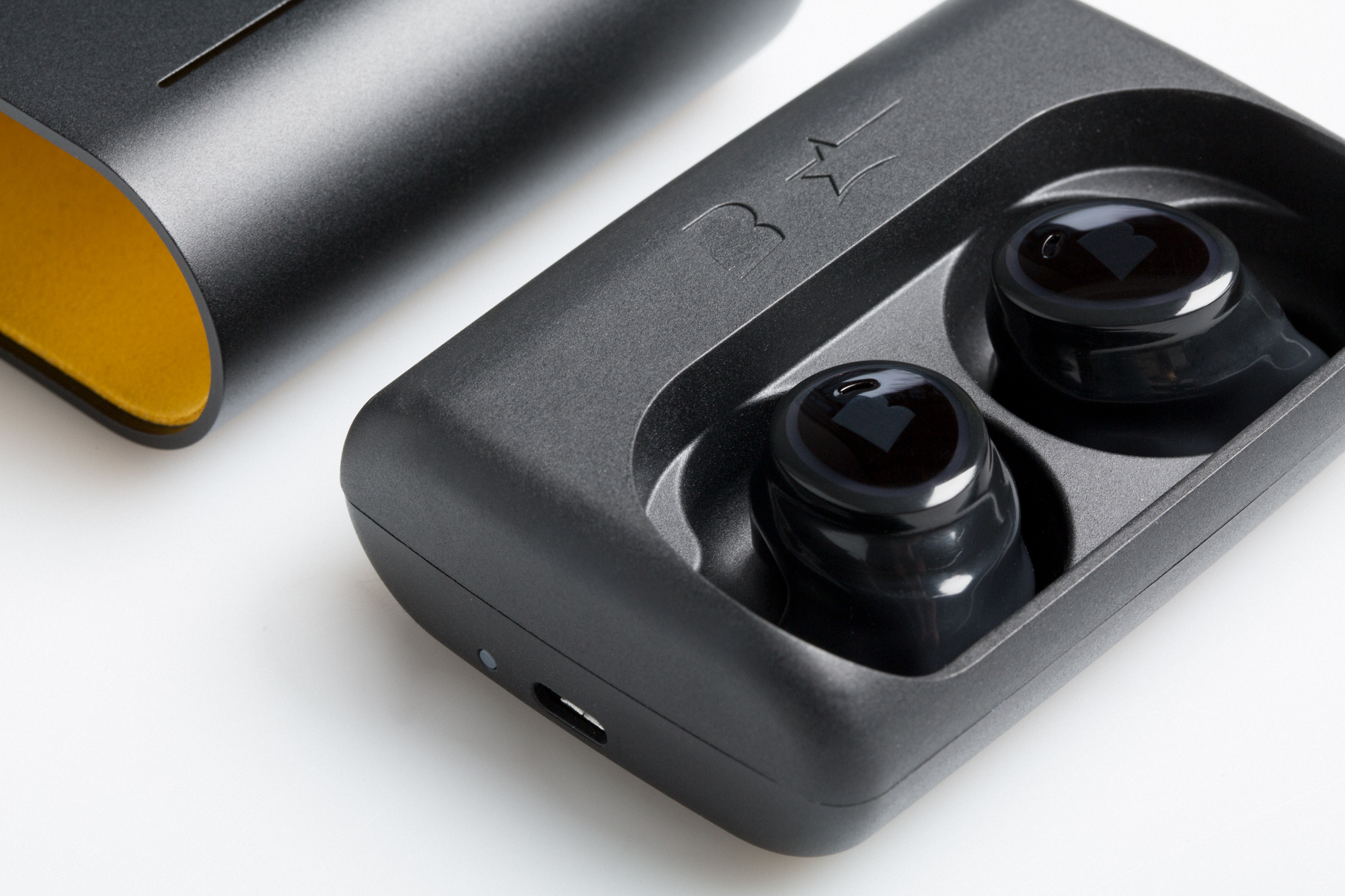 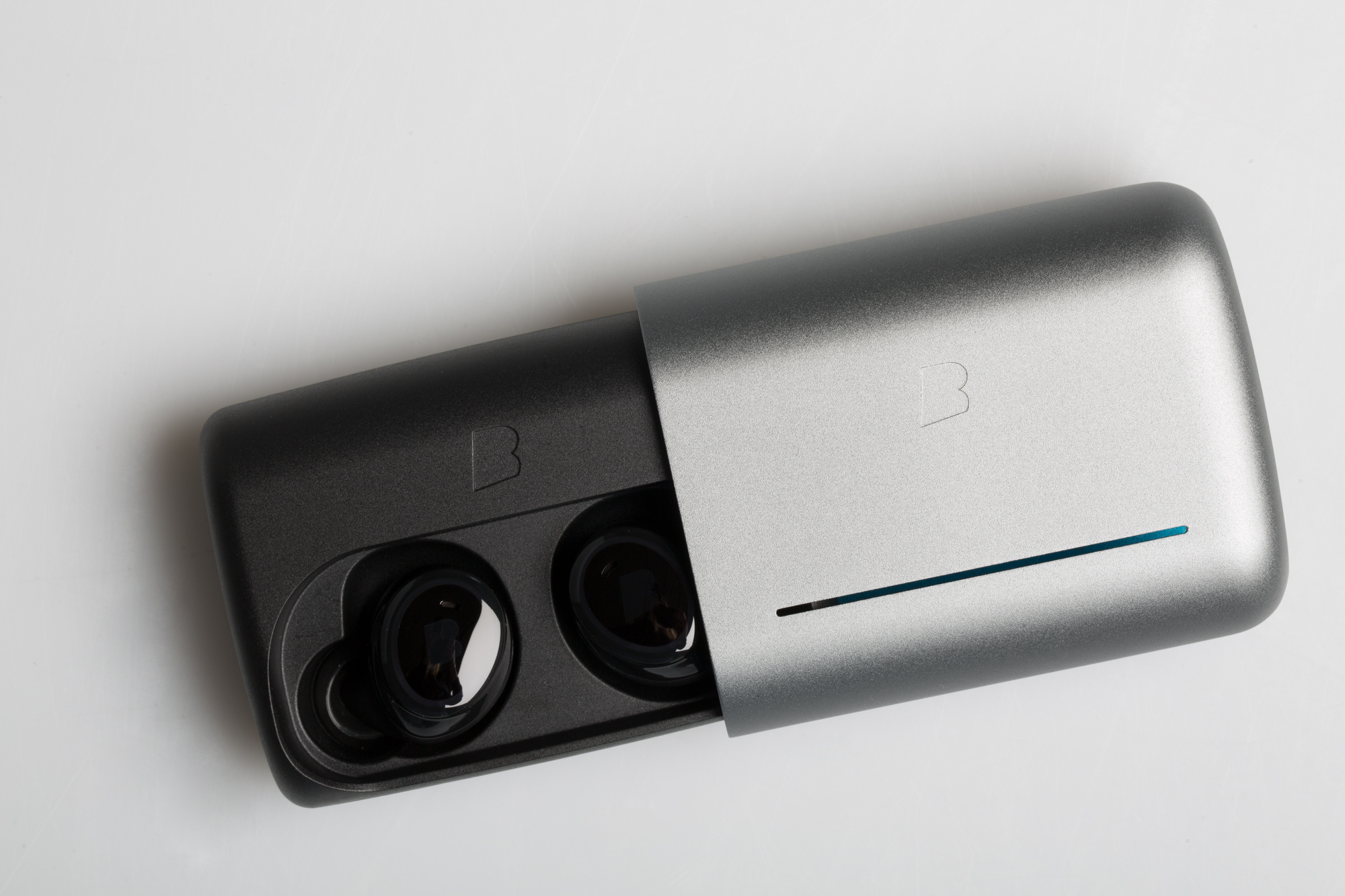 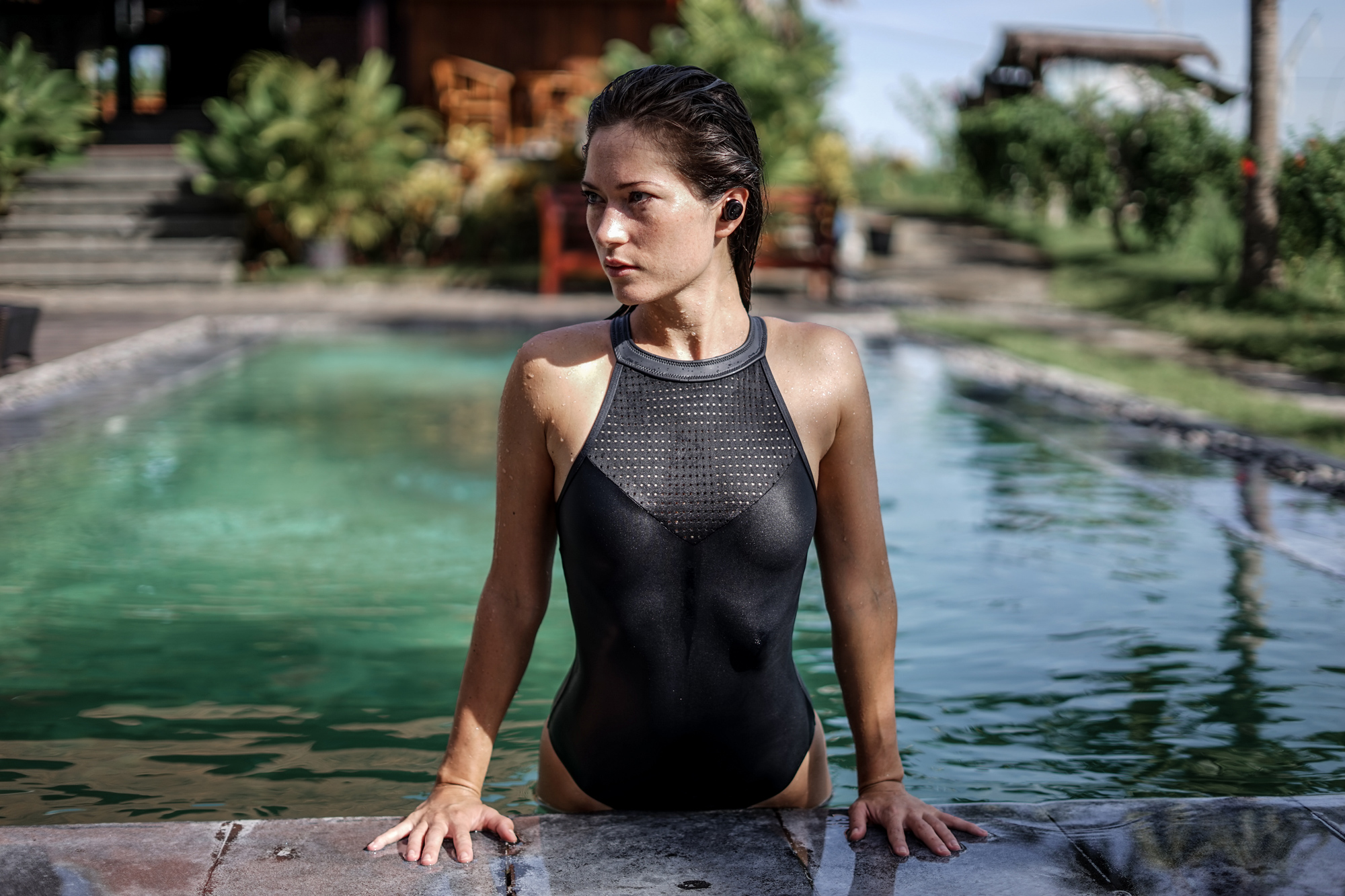 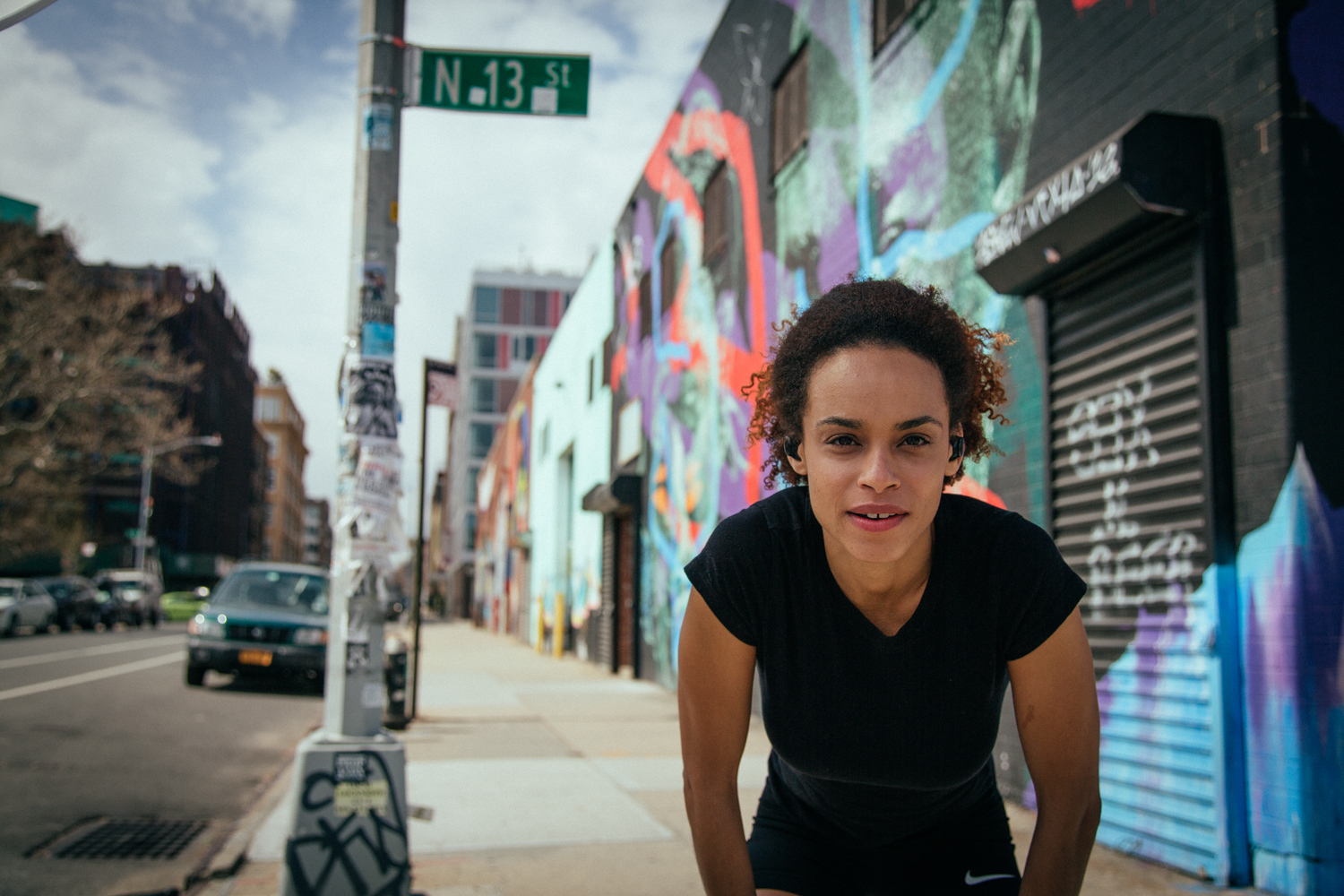 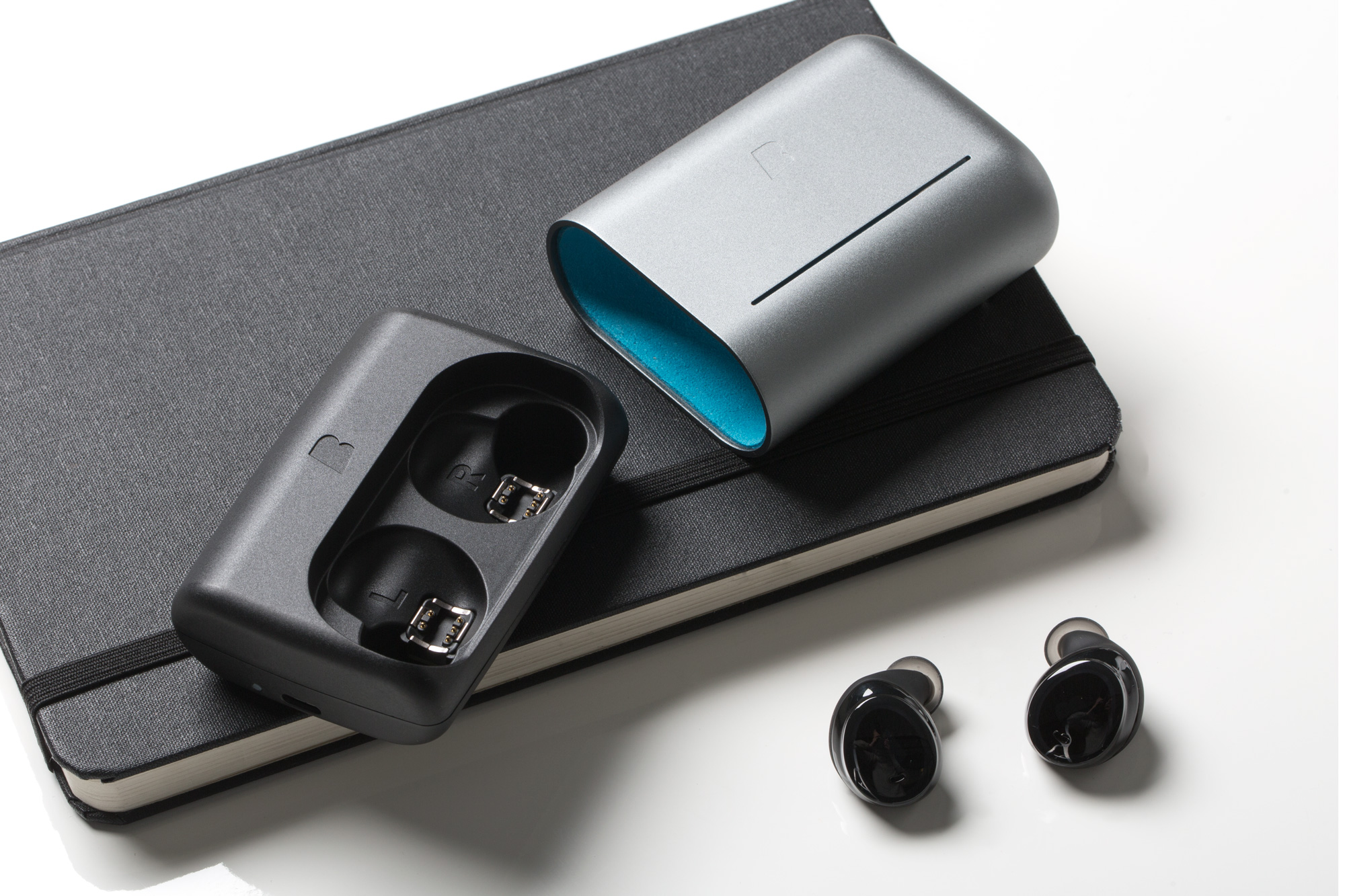 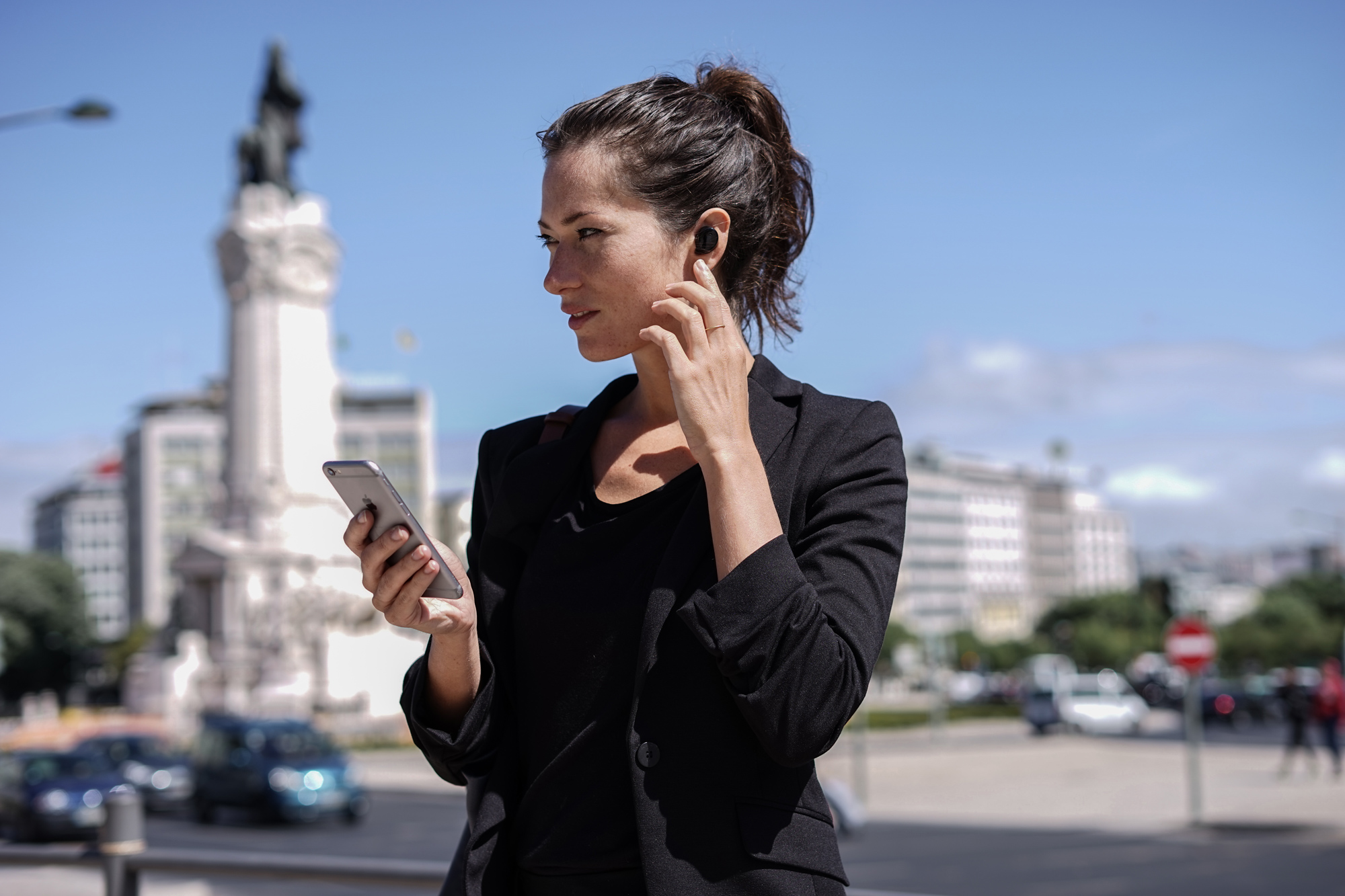 BOS 3
Bragi OS 3 (BOS3) is the fourth major OS update for The Dash and comes preinstalled on all new Dash Pro tailored by Starkey and The Dash Pro editions. New features include the following:

Virtual 4D Menu – The Virtual 4D Menu is a unique hands-free, head-gestures (and audio only) based, way of interacting with The Dash Pro tailored by Starkey, The Dash Pro and The Dash, giving users the option of accessing core features in situations where their hands are preoccupied with other things.

Easy Bluetooth Handling – A simple one-touch setup connects your Android, Apple or Windows device in a matter of seconds. The six-digit confirmation code has been removed while a secure connection is maintained. The menu for Bluetooth Classic and BLE connections can be now found on the right earbud, leaving the left earbud for third party Apps integration.

Auto Tracking – The Dash now understands whether you are running, cycling or swimming so the user can keep track of workouts automatically without ever pushing a button. This marks the first A.I. powered skill that simplifies the UI and makes fitness tracking hassle free.

Simplified Touch Interface – The Touch UI has been simplified and made more ergonomic to use. Additional “Use Guides” support the user to easily connect to The Dash and explore its smart capabilities.

Offline Storage and Data Transfer – Activity sessions are now stored and transferred to the Bragi app automatically so they can be accessed for future use.

Clearer Audio Transparency – The microphone’s noise floor has been greatly reduced and improvements have been made in understanding the naturalness of the acoustic landscape.

For videos, images and more information about The Dash Pro tailored by Starkey, The Dash Pro and BOS 3, download the Press Kit ZIP file here: https://we.tl/3RrqI6mECh
ABOUT BRAGI
Bragi was founded in 2013 and went live a year later on the crowdfunding platform Kickstarter.

With 15,998 backers who contributed over $3.3 million (USD), Bragi has evolved from a promising startup to a market moving creator of innovative technology, opening the new category of Hearables. This includes more than 150 unique patents in the space. Through relentless innovation and discovery, Bragi wants to transform the world of smart headphones offering freedom of movement, maximum comfort and amazing sound – all while audibly coaching, tracking movement and capturing key biometric data.

For more information about The Dash Pro tailored by Starkey, The Dash Pro or BOS 3, visit www.bragi.com/press.

ABOUT STARKEY HEARING TECHNOLOGIES
Starkey Hearing Technologies is a privately held, global hearing technology company headquartered in Eden Prairie, Minnesota. Founded in 1967, the company is recognized for its innovative design, development and distribution of comprehensive digital hearing systems. The company develops, manufactures and distributes hearing aids via three distinct brands – Audibel, NuEar and its original brand, Starkey. As the only American-owned and operated provider of hearing technologies, Starkey Hearing Technologies is proud to support veterans and active military service personnel with the best in American innovation, including a suite of revolutionary hearing technologies and other resources. Starkey Hearing Technologies currently employs more than 5,000 people and operates 21 facilities and conducts business in more than 100 markets worldwide. For more information, visit www.starkey.com.

War for the Planet of the Apes ...