The Adidas MiCoach Fit Smart is a fitness band aimed squarely at those seriously looking to add analytical data to coincide with their workout routines. From the design of the device to its functionality, Adidas tailored it solely to serve a purpose without much fun being involved in the process.
Functionality

The Adidas MiCoach Fit Smart is a large device. Even when compared to something like a Fitbit Surge it wins in weight, length, and overall width. Since the device is not meant for a daily tracking it is more acceptable as you will only be wearing it during specific scenarios. Even so, Adidas could have made more of an effort to downside its overall footprint on your wrist as I found it difficult to use with workout gloves that exceed longer than my wrist bone.

Design
On the plus side the silicon band is extremely comfortable and provided zero irritation after prolonged usage. The curvature of the band also creates a snug fit around the wrist. There are two color options (white and black) Adidas has made available and I personally suggest the black has it has held up well to wear and tear during my short usage and the LED display looks MUCH better with this color variant. The Adidas MiCoach Fit Smart is technically only sweat and splash proof, but there were occasions in which I forgot I had it on and took it in the shower with me and it came on of the slip up with no issues. I wouldn’t recommend it, but the device should hold up well with wet environments; just don’t go swimming with it.

The LED display is a cool touch to an otherwise boring looking fitness band. Even in direct sunlight visibility is decent and provided information in a cool sport ticket like fashion. Overall, I wouldn’t prefer a display of this type, but the Adidas MiCoach Fit Smart made it work in a way that did not impede on functionality in the least. Side notes, the Adidas MiCoach Fit Smart uses a traditional watch strap to mount it on your wrist and kudos to Adidas for choosing this option. With a wearable this large, it’s the only practical option, and with a ton of notches in the band you’re sure to find the perfect fit. There are two sizes that range from (184mm) and (207mm) for both men and woman as well. 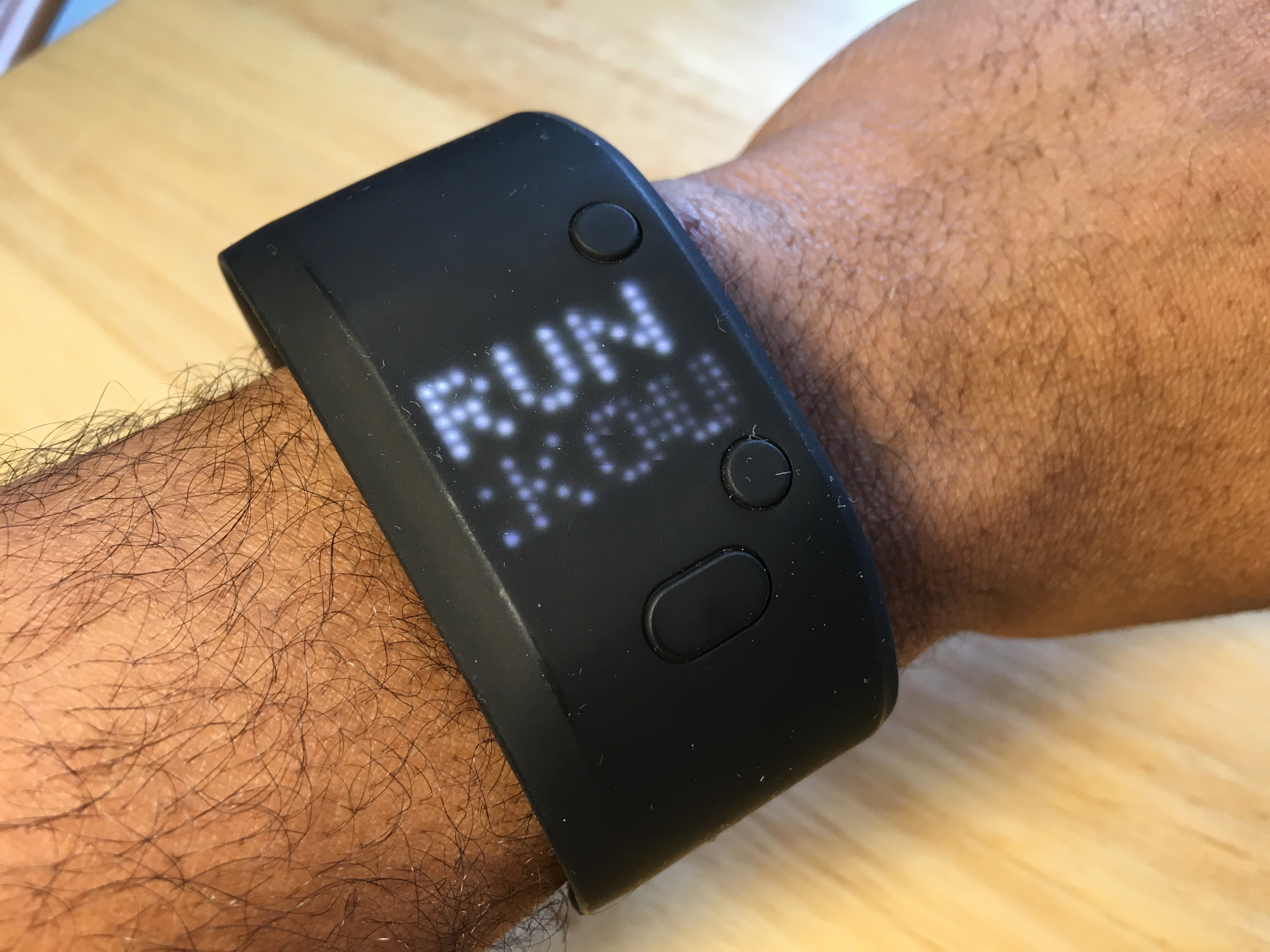 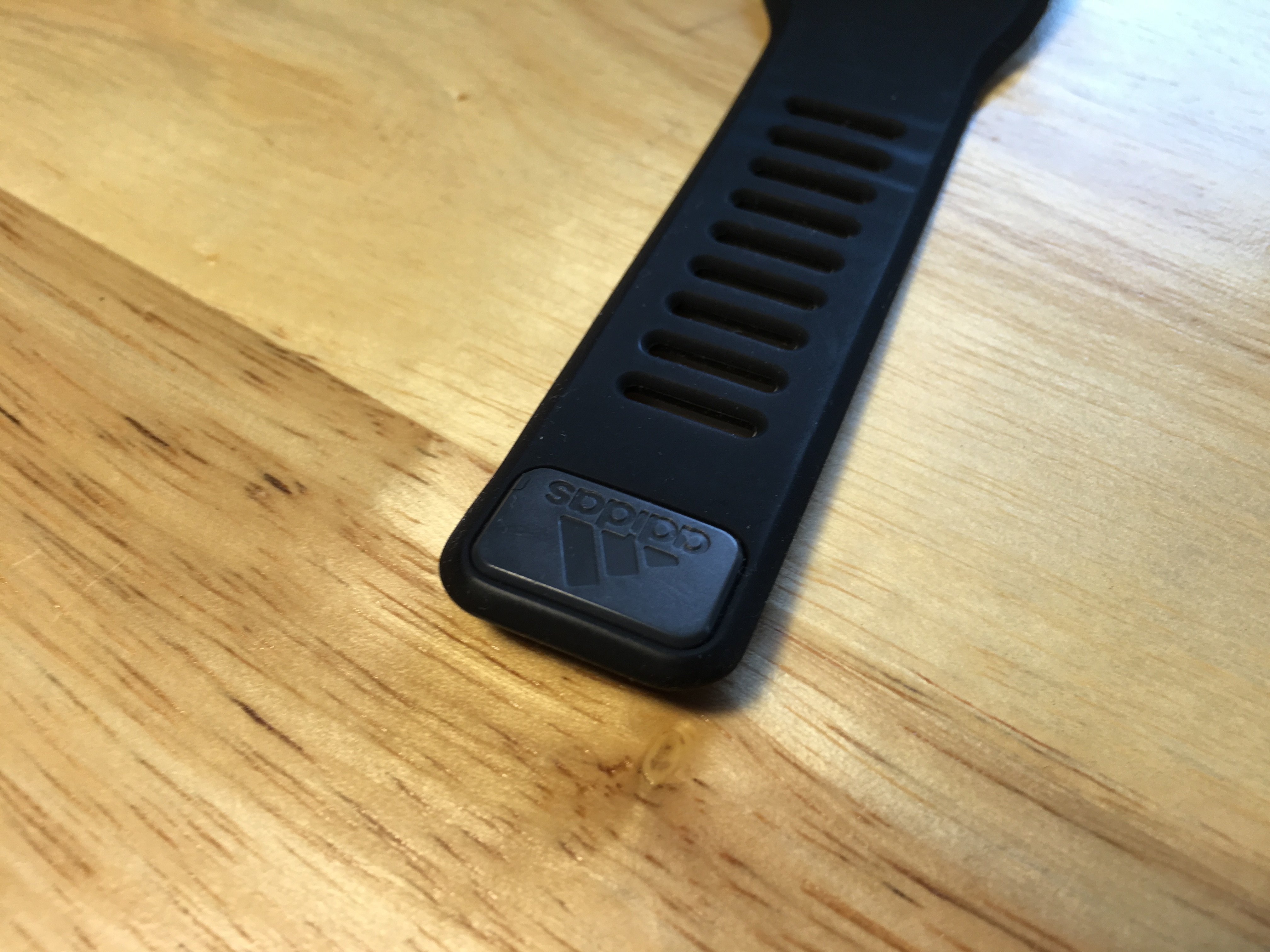 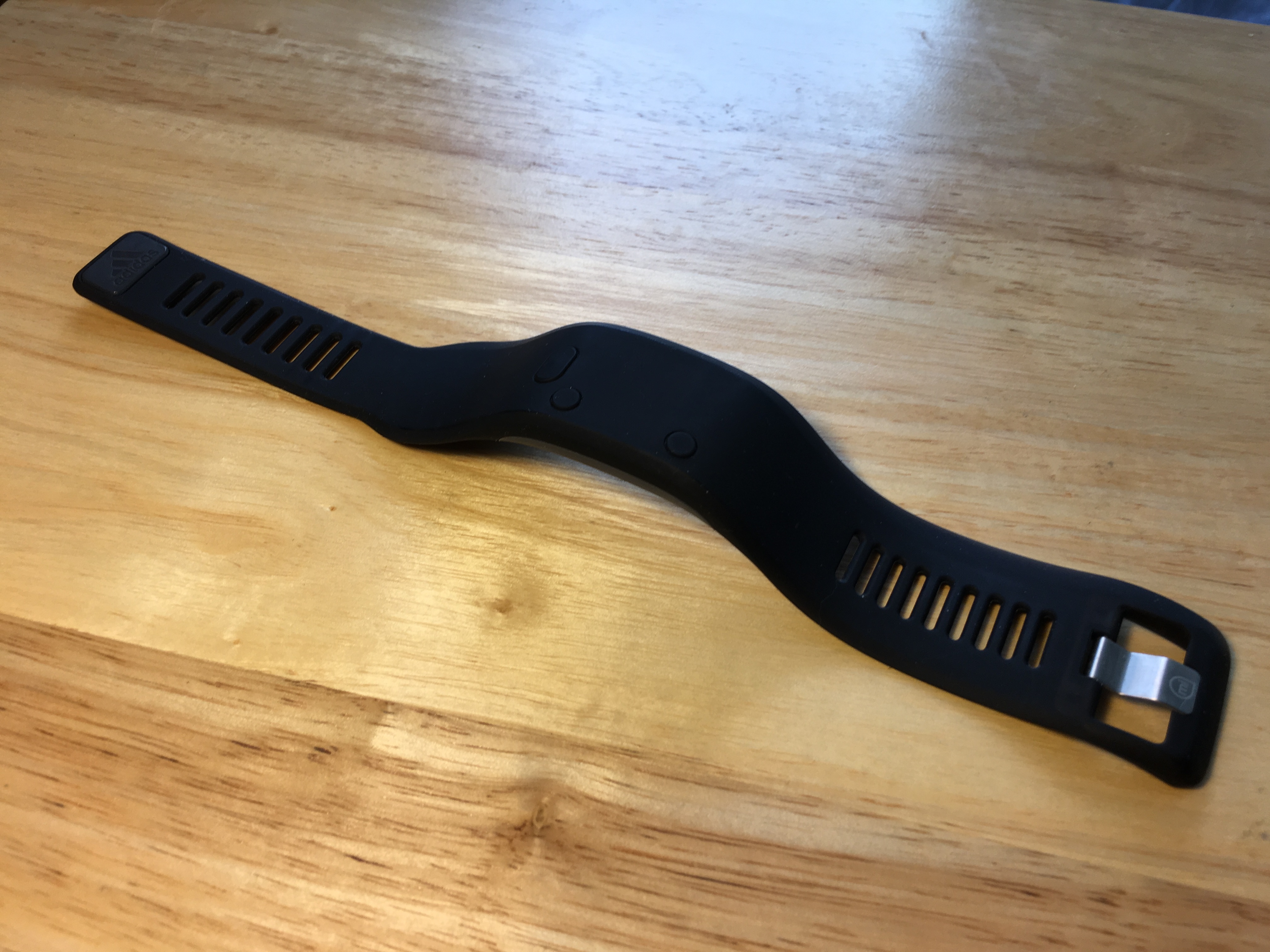 Adidas MiCoach Fit Smart has none of the daily tracking functionality that you would get from a FitBit or Garmin fitness band. The device obtains data only when using it during a workout routine or when you manually inputted via the MiCoach application. There are three buttons uses to operate the fitness band. Even though it’s 2016, I found the buttons, which have great tactile feedback, to provide a pleasant experience with the LED based software on the device. A touchscreen on a device this size would not make sense in the grand scheme of things. The buttons provide information like previous running stats, heart rate (during the workout session/no idle monitoring), MiCoach training modes which are also accessible through the MiCoach app, and battery stats. We will be have a head to head comparison of the MiCoach app and other competitors in the near future so we are deciding to hold off explaining much about the MiCoach application in this review, however, a quick summary is that it is amongst the top tier experiences in the fitness market today. Adidas has done well with coinciding hardware and software to work somewhat seamlessly together without much fuss in between.

The Adidas MiCoach Fit Smart doesn’t have a GPS inside and opts to use an accelerometer like most fitness tracker in the sub $200 category. Unfortunately I think this is where Adidas made a huge mistake. The device itself is not a daily tracker of fitness data and is only meant to obtain information for one’s workout session. To omit a GPS for a market segment of runners that utilize that feature daily seems to cut a significant customer base from event tempting to by a workout specific fitness band. Does the accelerometer obtain distance and stride data, yes. Is it comparably in accuracy to a GPS enabled fitness band, no. Adidas really missed an opportunity with this one.
The Adidas MiCoach Fit Smart uses a color LED system that with tell you varying degrees of heart rate intensity while working out. I found this feature to be the coolest as the color red indicated the highest level of heart intensity and informs the user that they are in fat-burning territory at a glance; intuitive and functional features that utilizes the devices awesome display system. The heart rating monitoring was also a extremely accurate in my testing. Compared to other like devices the difference was a bout 1-2 bmp in most cases. All in all, the device does well with its main features, but I don’t know if it’s enough to sway said customer to the device over the more cheaper and popular options.

Conclusion:
I can’t recommend the Adidas MiCoach Fit Smart to the everyday consumer. The device has a hefty price tag of $199 (can be found cheaper on various online outlets). I also can’t recommend it to the hardcore fitness junky as the daily monitoring is something that is a must for most athletes, especially with the idle heart monitoring being omitted from the device. It’s like the device is stuck in the weird realm of purgatory and can’t cater to either side of the spectrum. I see the Adidas MiCoach Fit Smart as more of a training fitness ban from upcoming consumers that want to know the basics of training methods and minuscule data analytics. Besides that small market segment, I cannot recommend purchasing the Adidas MiCoach Fit Smart with so many cheaper and better options available.